A Night at the Opera

I recently enjoyed a night at the opera.

Really, I thought comedy was their schtick.

Great. There’s not a lot of throwaway one-liners in jealousy—“it is the green-eyed monster which doth mock the meat it feeds on.”

I recently enjoyed my first night at the opera: Otello.

I was born last century in Auckland, New Zealand, 1960s, so have enjoyed quite a number of earthly orbits around the sun. Yet never in those fifty-something revolutions have I been to an opera.

Not sure: I love art, enjoy art, support artists, consider myself an artist (writer/actor), can even spell it without the use of a dictionary—but no operas (one “p,” right?).

As I introspect on the cultural omission, two things come to mind: firstly, we tend to dine at the artistic buffet visited by our parents, mentors, teachers, neighbours, and friends. If any of this group doesn’t list “opera” on the menu, then there is a good chance we will be starved of this essential creative art group.

Secondly, a line from a Crosby, Stills, Nash & Young song: “teach your children well.” Wherever you feel comfortable on the “artometer,” if possible go beyond your comfort zone and take your sprog to see an opera.

One of my teachers at Kelston Boys’ High School, Mr. Morgan (a man I adored) did teach me very well. He introduced me to some great works of art on phonograph records (a black, 12-inch polyvinyl chloride disc). He strutted and fretted “his hour upon the [classroom] stage and taught this schoolboy idiot, full of sound and fury” the majestic plays of William Shakespeare:

From Julius Caesar: Friends, Romans, countrymen, lend me your ears.

From Henry V: From this day to the ending of the world,
But we in it shall be remember’d;
We few, we happy few, we band of brothers;
For he to-day that sheds his blood with me
Shall be my brother;

But alas, for us, a band of Kelston Boys brothers—no opera, at least not in Mr. Morgan’s English class.

For one night, dry-clean that tuxedo, “rattle your jewelry,” as John Lennon famously quipped at a Royal Variety Performance, knock back a couple of cocktails—stirred or shaken—before or during intermission, and immerse yourself in the experience.

My wife, her sister, and I did when we recently went to see Otello at the Segerstrom Center for the Arts in Costa Mesa, California, and we loved it. There is a reason a four-act Italian opera by Giuseppe Verdi to a libretto by Arrigo Boito, first performed at the Teatro alla Scala, Milan, on the fifth of February 1887, is still being performed 135 years later in Orange County, California: The music, story, and lyrics stir the soul.

My only concern after acquiring the tickets was how well would I access the libretto as it was being sung. My Italian is limited: pizza, Lamborghini, Papa. I could maybe come up with one sentence…Il Papa ha usato la Lamborghini per ottenere la pizza(the Pope used the Lamborghini to get pizza)…but insufficient to appreciate an entire opera.

And then as I took my seat and glanced upward, an all-encompassing English expression, by way of a famous cartoon character, came to mind:

There is a thin electronic screen above the stage that provided all the Italian lyrics in English subtitles.

Access was granted, and I quickly formulated my personal operatic etiquette: glance up at the screen to get the line, then redirect my eyes to the stage to enjoy the set and stage directions while simultaneously allowing Verdi’s poignant music to wash over me, and be enhanced by the powerful and passionate voices of the opera singers.

As I began to relax into my routine, one epiphany washed over me: Opera is a perfect medium for powerful emotions and their employ: love, hatred, loyalty, and betrayal to cite a few. Not sure if one on the great toilet roll debate—up or down—has ever been written.

Of course, Otello has one of the most famous characters ever conceived that we love to hate: Iago. Conductor Carl St. Clair and the Pacific Symphony, along with the Pacific Chorale, provided a concomitant companion to the singers, especially Baritone Stephen Powell, who, as Iago, quickly caught my eye and ire. I was soon swept away to the physical and emotional devastation that played out before me.

I do recommend attending a theatrical staging of Othello, or seeing one of the many cinematic incarnations of Shakespeare’s play prior to attending Verdi’s operatic transcription.

And then one day shy of a fortnight and biggity, biggity, Bing—as in Bing Theatre, I was attending my second opera: All The Truths We Cannot See: A Chernobyl Story. This was a co-production between the USC Thornton School of Music and the Sibelius Academy of Uniarts Helsinki.

According to Glenda Dawn Goss, the opera’s librettist, this work is “a story about fundamental conflicts of human existence: courage and cowardice, love and hate, past and future, life and death.” Again, a powerful emotional undercurrent that was enhanced by the fact that I saw the opera on Earth Day, and the setting is in Ukraine, which is experiencing right now the scourges of the maniacal political ambitions of a neighbouring president.

After the stunning performance, I did cross paths and clink drinks with Adam Kerbel at Rock & Reilly’s. He played Deerheart in the opera. To a background of the pine-tree-tall Finnish cast’s hearty banter (all in their native tongue), Adam gave me his behind-the-curtain takeaway of the operatic art form: “Opera really is about oppositions, and oppositions in the biggest possible sense…everything in opera is huge—absolutely enormous, the music, the singing, the lights, the colours, the characterization, the costumes, the makeup, the room itself is big. And it’s through those elements and the size of the elements that opera begins to speak.”

So, reader, wherever you are on this fragile planet, when the opera company comes to your town, what say you? 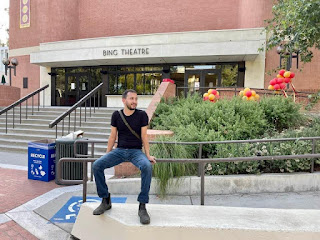 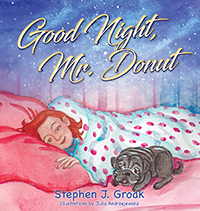