First up is SPQR by Richard Blade, an artist I have admired for many years. Indulge me in some context…

Three times in my life while living in Southern California, my path has intersected with world-famous DJ and best-selling author (World In My Eyes) Richard Blade’s arena of entertainment. In each encounter, I was always impressed with his British-infused decorum, good-natured wit, and talent.

Melancholic, and missing all things New Zealand, I found great comfort in listening to Richard Blade on LA’s “The World Famous KROQ” (FM 106.7). Although we were born in different countries of the Commonwealth of Nations, he spoke my language and played my tunes: Billy Idol, Depeche Mode, Duran Duran, New Order, The Cure, The Smiths, U2…

The second time I met Mr. Blade was Sunday, December 7, 2014. In honour of my LA-born-and-raised, “Latinalicious” wife’s fortieth birthday, I organized a surprise party for her. I will forever treasure the look on Teresa’s (mi esposa) face when we arrived at la casa de su prima for her to discover not only la familia, but also many of her childhood mates, and of course DJ de la noche: Richard Blade.

The third time was Christmas 2020, when during our annual work Kris Kringle gift exchange, I received a copy of SPQR.

Questions abound at a North Carolina archaeological site when a white ivory Roman staff with a golden eagle and the letters S.P.Q.R. is discovered by some North Carolina State University students in a Native American burial site. Professor Andrew Donaldson, who oversees the dig, recognises that the four letters are an abbreviation of a Latin expression…and the implications of Romans arriving in America hundreds of years before Columbus.

In his first novel, Richard Blade answers this stage-setting historical discovery with a heart-pounding, relentless tale. In SPQR (Latin for Senatus Populusque Romanus—The Senate and People of Rome; impress your friends with that line at your next barbeque), the author goes Roman—hard! XLV (forty-five) page-turning chapters, including the brutal military practice of Decimation that Gaius Julius Caesar employs as punishment against Legio VII for their recent loss in the August 55 B.C. invasion of Britannia. High above the cliffs at Cap Gris-Nez in Gaul, six hundred and eighteen soldiers, the surviving members of the failed campaign, are commanded to strip naked as they await their fate. For those readers who experience acrophobia…beware!

Blade’s love of history permeates every page of the text. In fact, he’s up front about it. In the Acknowledgments section of the book, he credits this noble quality to his father, and we the readers are the recipients of a diligently researched and wildly entertaining story.

An index of Latin words, curses (Roman sailors swore long before our current naval personnel), and expressions helps us navigate the text and acquaint ourselves with Praetorian Demetrius Marius Varinica, Tiberius, Sallus, Flavius, Aldamma, Claudius, and other larger-than-life characters of the novel.

The highly decorated and distinguished Varinica is “persuaded” out of retirement by First Consul Pompey. He is tasked with assembling a new legion—Fifteen—and sailing with them and their Roman steel to bring the infamous Pax Romana to the rebellious Britons.

In a well-crafted novel (with some input from the indexed Roman gods), even the might of Rome can be thwarted: General Demetrius Varinica and the fleet never make it to Britannia. He and only a small portion of his legion ultimately end up crossing the dreaded Mare Tenebrosum (Atlantic Ocean) to an unknown world.

Of course, crossing this huge ocean is a transformative experience. Richard Blade made this journey himself when he moved from the United Kingdom to the United States. It is an epic crossing that has inspired countless artists and informed their work (Rod Stewart’s Atlantic Crossing comes to mind).

Blade infuses his novel with a perspective born out of the encounter of the Old World with the New, of the traditions of the Roman Empire with that of the Native American Croatan tribe. As the main characters from each distinct cultural group engage, themes of honour, fulfilling one’s duty, the politics of conquest, possessions, and what we take with us to the next life are explored.

SPQR also has heart in all its many manifestations—bravery, fidelity, and romance. The blossoming relationship between Demetrius Marius Varinica, a widower, and Kaya, the widowed daughter of the Croatan chief, has overtones of a historical seventeenth-century meeting between a Native American princess and an English explorer (name that Disney movie).

In the Foreword of the novel, Richard Blade lays the storytelling seeds that will fully blossom in the crescendo of the tale. As a student of history, Blade is inspired by heroic last stands; of unrelenting acts of bravery by a group of warriors who face overwhelming odds, yet never waver, never surrender, and are willing to give all—including for many the ultimate sacrifice. Some examples he lists are King Leonidas at Thermopylae, the soldiers who stormed the beaches of Normandy on D-Day, Davy Crockett, and Jim Bowie at the Alamo.

Richard Blade’s SPQR captures the spirit of such examples of courage when Demetrius Varinica and a small band of Roman soldiers defend the Croatan people from a human plague in an apocalyptic final battle. His story delivers!

Since it is now the holy-day season, my second review pertains to Christmas—specifically a doll.   Huh?   Indulge me in some context…   I ha... 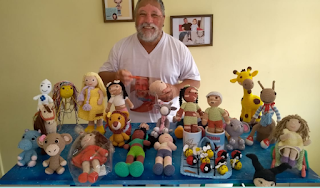